Early immigrants to the coalfield encouraged friends and relatives to leave their homes and take advantage of the mining boom. Exodus from Cardiganshire: Rural-Urban Migration in Victorian Britain by Kathryn Cooper.

Cardiganshire in the mid 18th to 19th century was not the place we know it as today. I have seen many descriptions of it and one was by an anonymous lawyer, who said “Cardiganshire is the fag end of creation, the very rubbish of Noah’s flood!”

And so it was, 3 x GGrandfather Daniel Jones, his wife Ann and their young son John upped sticks and moved from the rural setting of Cardiganshire to the industrial madness of Glamorgan via Monmouthshire. They probably didn’t have a choice. Times were hard for ‘ag labs’ (agricultural labourers) and lead miners to boot. With the onset of the industrial revolution, there was money to be made in ‘them thar hills’ of Glamorgan.

At this time, around 1833, there were no railways, not in this part of the world. The Liverpool to Manchester line was running, but there was no railway into mid-Wales, not for another 30 years in 1860.

How did they travel from Cardiganshire? 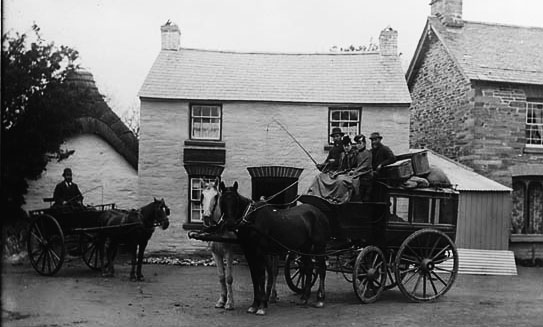 The roads in Cardiganshire were almost non-existent in the mid to late 18th century. The Royal Mail coach delivered to Carmarthen in 1787, but could go no further, due to the road being unusable. It would be the end of the century before the roads were improved enough for the mail to be delivered into Aberystwyth. Before this, the only form of transport was horse-back or on foot dragging a sledge behind. By 1840, when Daniel Jones and his growing family were settled in Monmouthshire, the road had seen a massive improvement. It’s likely they moved from Cardiganshire either by the ‘Cardy Cart’ which was a simple one horse drawn cart used to move meat and produce from the country side to the industrial towns. Sharing the back with a side of beef, half a dozen sheep carcasses and a hundred weight of carrots! The other way of travelling was to use one of the regular stage coach services that were in operation travelling between Aberystwyth and Merthyr Tydfil or Tredegar. Although these carriages had inside seats for comfort away from the weather, usually reserved for the more affluent traveller, most folk would be sat up on top with the luggage.

When they left  Cardiganshire they didn’t go straight to Merthyr Tydfil, but to Aberystruth which is a Parish to the east of Merthyr in Monmouthshire. The baptism of young Daniel Jones is the first official record of the family living there in 1834.

Remember, this is the son of  3 x Great Grandfather Daniel Jones who is also called Daniel! The record is from the baptism register of The Penuel Calvanistic Methodist Church, Church Street. The details are:

So now we know the family had definitely made the move by September 1834. The eldest son, John, was born in 1832 in Llanbadarn Fawr, Cardiganshire, so sometime between then and Daniel junior being born is when the move took place. There’s a few interesting things about this Baptism record. It shows Daniel senior as a labourer, so he was probably working in the local iron works or collieries. It also shows the family living in ‘Dyffrin Houses’ although I’ve not been able to locate it to date. There is a row of terrace houses in Abertillery by the name of Dyffrin Houses, but it seems quite a way from Tredegar. Having said that, the 1841 Census shows Daniel Jones and his young family as living in Blaina, which is close to Abertillery. What took me by surprise though is that they seem to be ‘Calvinistic Methodists’ or ‘Presbyterians’ as the movement would become known.

I always thought the Joneses to be staunch Union supporters and I know my Father, Grandfather and Great Grandfather were, but in 1831, the Tredegar Welsh Calvinistic Methodist Assembly at Tredegar condemned trade unionism across the board!

Even more surprising that the Calvinistic Methodists made such condemnation when you read this article from Adrian Vaughn, in his 1985 book “Grub, Water & Relief,” about the Tredegar Iron Works in 1832.

Utterly remote at the head of the Sirhowy valley, the town was a man-made hell. Men and children worked killing hours in the smoke and filth of the foundries and were maimed by molten metal. Their only medical help was that administered by the ‘Penny Doctor.’ Wages were paid in Homfray’s private coinage — banks were not allowed in the town — so workers spent their coins in Homfray’s shops, buying food at Homfray’s prices. Poverty and malnutrition followed and disease followed both

One can only imagine what it would have been like to live in such a place. It’s amazing how people coped living in a hell on earth. By all accounts, Merthyr Tydfil was no better and they were to move there next.

The next record we have of the family is the 1841 Census and they are still living in Blaina, Monmouthshire which comes under the parish of Aberystruth. The first official record of the family settled in Merthyr Tydfil is the birth of the twins Moses (2xGGrandfather) and Aaron in 1843 in Bridge Street.
Once in Merthyr Tydfil, the family didn’t seem to move far from the original place at Bridge Street. In the 1851 Census they are living in Wellington Street which runs parallel to Bridge Street. Daniel’s occupation is shown as Barber. By the 1861 Census they have moved less than half a mile away to 9, Victoria Street where Daniel has his own Hairdresser premises.

Where have they gone?

Sometime after the 1861 and before the 1871 Census of Merthyr Tydfil, the family, just like Morgan and Mary Jones back in Cardiganshire seem to vanish into thin air. On the 1871 Census there’s a different family located at 9, Victoria Street. I have searched and searched looking for at least Daniel and Ann, even with the help of the brilliant librarian at Merthyr, Carolyn Jacob, but still we cannot find them. I have trawled the GRO indexes for a death of Daniel Jones and I was convinced I had located his record. Alas, when the certificate arrived it was another Daniel Jones of the same age. We think we have found the children, Thomas and Aaron, lodging at Rhydycar in Merthyr and Moses who was lodging at ‘Back Of Travellers Rest’ which is also in Merthyr. Even checking the Cardiganshire records to see if Daniel and Ann had gone back to the country, some families did this, but no, nothing at all. Strangely, in the 1881 Census of Merthyr Tydfil, Aaron is living back at 9, Victoria Street with his own family.