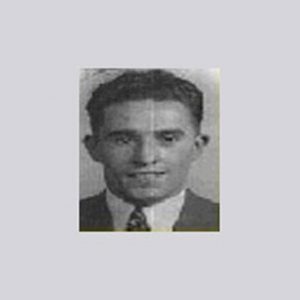 Bertrand Jones who made the ultimate sacrifice at Sahmaw Chaung

Bertrand Jones went to war with The South Wales Borderers and made the ultimate sacrifice on August 5th 1944 fighting the Japanese in Burma. The following is detail of his regiment and the battle of Sahmaw Chaung where Bert gave his life. He is buried in the Taukkyan war Cemetery, Burma. Plot 6.F.21.

The 6th Battalion was raised in Glanusk Park, Breconshire, in July 1940. Almost none of its men had had any military training. It trained as an infantry regiment until April 1942, when it suddenly became a tank unit – 158th Regiment Royal Armoured Corps (The South Wales Borderers). Psychiatrists weeded out those unsuitable for the new role. In this capacity the battalion sailed for Bombay in October 1942, and trained in India as a tank regiment until March 1943, when to the great disappointment of all ranks, it was reconverted to infantry. It now trained as an amphibious assault unit and moved to Calcutta to attack Akyab. But this attack was cancelled and the battalion was sent to Burma to fight as an ordinary infantry regiment in the Arakan. In spite of a chequered career and many disappointments it was now to prove its worth.

There were only two roads through the Arakan and one had been designed as a railway and ran through a series of tunnels from Maungdaw to Buthidaung on the Mayu River. The Japanese were in control of this road and so could pass men and supplies quickly from one side of the Mayu hills to the other. The battalion arrived in the area on 20th March and its first objective was the capture of the two tunnels used by the Japanese for storage and gun emplacements. The enemy were subjected to three days of shelling and dive bombing and then ‘B’ Company began a determined attack, which involved the taking of four enemy positions camouflaged in thick bamboo, which lay one after the other on a spur commanding the approach to the feature over the first tunnel. The battle developed into fierce hand to hand fighting, in which ‘B’ Company pressed on doggedly. Sergeant Woodhouse won a DCM for capturing an enemy post single handed when its fire decimated his section. In two and a half hours ‘B’ Company drove back the enemy and established themselves over the first tunnel. The Japanese however, remained in the tunnel underneath. Meanwhile, ‘D’ Company attacked a spur on the other side of the tunnel in support but failed to take its objective and suffered a number of casualties. This spur was named ‘Tredegar Hill’, for most of the men killed came from Tredegar in Monmouthshire. Earth from this hill now stands in a casket in the chambers of the Tredegar Urban District Council. The next day day a Sherman tank was brought up to fire into the mouth of the tunnel. Bodies and debris were blown out of the other end of the tunnel and ammunition stored inside exploded and burned for hours. Next day the tunnel was occupied and aptly named ’24th Tunnel’. The Japanese abandoned Tredegar Hill without further fighting. For this action, which cost the battalion eleven killed, Major Crew-Read commanding ‘B’ Company was awarded an MC and an Indian water carrier who helped evacuate wounded received an MM.

By July 1944, the Japanese army in Burma was being pressed from the east by the 14th Army from Manipur, by an American and Chinese force in the north and by the Chinese fron Yunan. On 4th July 1944, the battalion was sent to Ledo to reinforce the American Chinese forces operating in North Burma under General Stillwell. It was flown to the Myitkina area and set off towards Mogaung, supplied by air, living on American rations and supported by Chinese artillery. The division had had to leave its transport behind for the duration of the monsoon, and the battalion had only a few jeeps adapted to run on the railway line, and eight mules. From Mogaung (on the Myitkima-Mandalay-Rangoon Railway) the battalion began a nine months march, the first hundred miles of which ran along a narrow corridor in thick jungle, in one of the world’s wettest and most unhealthy areas. The first battle was at Sahmaw Chaung. The Japanese held Sahmaw village and railway station. The Battalion task was to outflank a foothill known as Hill 60 and to capture a point to the west where a track forded the Sahmaw River. This would cut the Japanese line of retreat from the main attack. The battalion spent thirty six hours in an assembly area, drenched by rain and hidden in long grass only a thousand yards from the enemy, and in the early morning of 5th August, they began the attack – ‘A’ and ‘B’ Companies on the right flank, ‘C’ and ‘D’ on the left, and ‘HQ’ in the centre. The advance was over flat ground with little cover except grass some three feet long. The Japanese were in strong positions in a chaung with steep banks running at right angles to the line of advance. They poured fire on to the centre column and the Commanding Officer, Lieutenant Colonel Cresswell and his staff had to crawl into a ditch only thirty yards from the enemy. The flanking companies were held up by heavy fire and suffered many casualties. ‘A’ and ‘B’ Companies reached their objectives by dint of hard fighting and a byonet charge. ‘C’ Company’s leading section was wiped out except for its bren gunner who, with Lieutenant Harris and Sergeant Carr, attacked the enemy position, killing about ten Japanese, and enabling the company to take cover, but they could advance no further. Colonel cresswell and his staff crawled back some six hundred yards and then withdrew the left and centre columns who crawled back under cover of a smoke screen. The next day the Japanese positions were heavily shelled and ‘A’ and ‘B’ Companies were then able to occupy them without much opposition. The battler had been fought in intense heat and discomfort and it cost the battalion four officers and seventeen other ranks killed and fifty eight wounded, but had achieved its purpose. Three MCs, one DCM and four MMs were awarded.

Through the War Graves Photographic Project, I have been able to obtain a photograph of Bert’s grave in the Taukkyan Cemetery, Myanmar.

Bert’s war medals, The Burma Star, The 1939-45 Star, Defence Medal and War Medal 1939 -45 were sent to his mother in Merthyr Tydfil. They are in safe keeping and were kindly photographed by Lesley-Ann Jones. 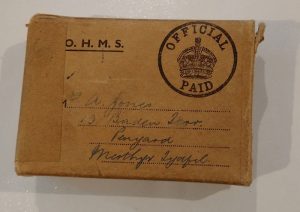 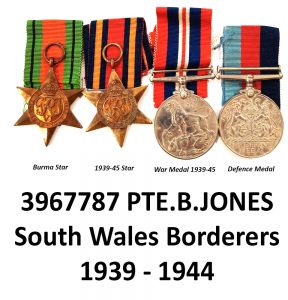 For a better explanation of each medal, I’ve added the appropriate link below.

This is a photograph of Bert with an unknown soldier. I have no details where it was taken, although he is in the uniform of the South Wales Borderers. It looks like it could be abroad in either India or Burma, although I don’t know for sure. It has been kindly sent to me by Tricia Johnson who is the same generation of Jones as myself. 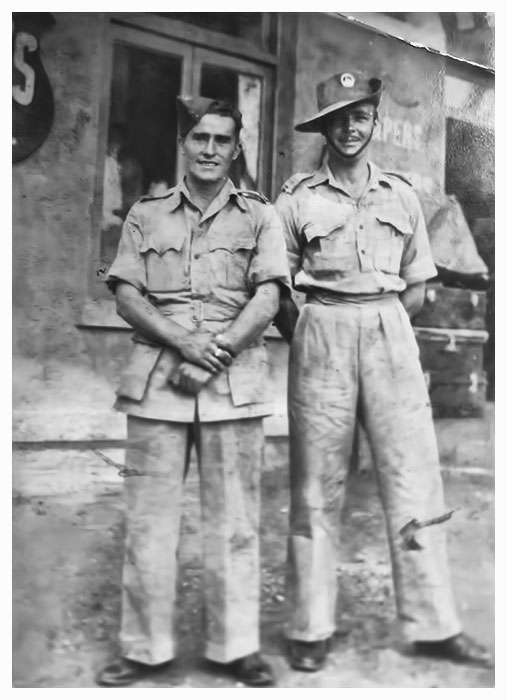 This is a letter home from Bert while he was stationed in India. It’s addressed to his sister, Gladys and her husband Glyn. It was shown to me by the youngest granddaughter of Gladys & Glyn, Candida Prophet and she keeps it safe in a beautiful little metal box. She knew nothing about it until it was left to her by her mother Jean who is mentioned in the letter. 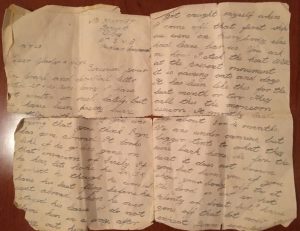 Page One of the Letter Home 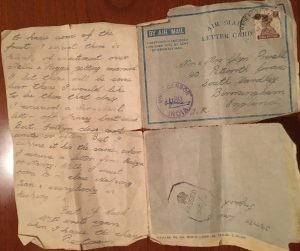 Page Two of the Letter Home

The Contents of the Letter.

Dear Gladys and Glyn,
Recieved your ? graph and Air-Mail letter dated 25 & 26 June. Sorry I have not written so much lately, but we have been pretty busy & ? with travelling. You was saying that you think Bryn has gone abroad. It looks
like if he has gone on that invasion of Sicily. If he has,let’s hope he is O.K.
I expect he though(t) he would have his last fling before he went abroad, where he over stayed his leave. I do not blame him in a way, after
? out here got caught myself when I come off that first ship we were on. Everybody else had leave bar us. You ask me how I stick the heat. Well at the present moment it is raining cats and dogs. It has been like this for the last month or two. They call this the monsoon season. It mostly lasts
for about 3 or 4 months.
We are under canvas, but bigger tents to what they were back home. As for the heat it does not brown you, but burns you if you show your body off to it. The food is not so hot plenty of fruit but I have gone off that lot now. I expect Jean would ?
============================
to have some of the fruit. I expect there is plenty of excitement over Nellie & Reggie getting married I bet there will be some beer there that day.
I received a Air-Mail letter off Nancy last week. But Emlyn does not so often. But I suppose it (h)is the same, when I receieve a letter from Emlyn or Nancy. Well, I must come to a close Hoping Jean & everybody is keeping O.K.
Best of luck
Will write again when I have the chance
Bertram