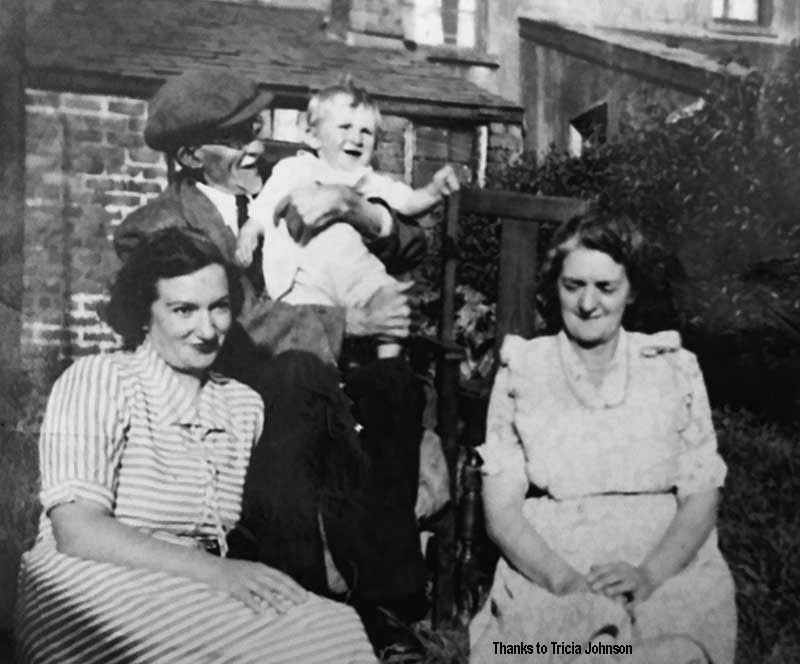 William Daniel Jones. Born on the 17th November 1874 to Moses and Hannah Jones (Richards). The address given on his birth certificate is 12, Cyfarthfa Row, Merthyr Tydfil. He was the eldest of 6 children, his siblings are, John, Catherine, Miriam, Moses and Ivor. How long the family were at Cyfarthfa Row for is unknown, but by 1881 they are shown on the census as living at 2, Pontmorlais West, Penydarren, Merthyr Tydfil. It’s interesting to note that his father, Moses, was a hairdresser, an occupation which William Daniel would take up in later life. However, by the 1891 census, Moses and William Daniel are working as Coal Miners. It’s probably safe to say that William had been down the mines for a couple of years. The family are now living at 23, Penyard Road, Merthyr Tydfil.

From all accounts, Big Daddy was a man with a thirst for knowledge. Jean Nicholass told me that he taught himself Esperanto. Indeed, the local papers show accounts of small groups of interested people in the South Wales area arranging meetings to further the progress in learning the language. The word Esperanto translates into English as “one who hopes” and is a language that was designed to serve as a universal second language to foster world peace and international understanding. I would like to think that this was also a fitting description of my Great Grandfather, someone who wanted world peace and understanding. This, of course, was still before the two world wars he would live through. 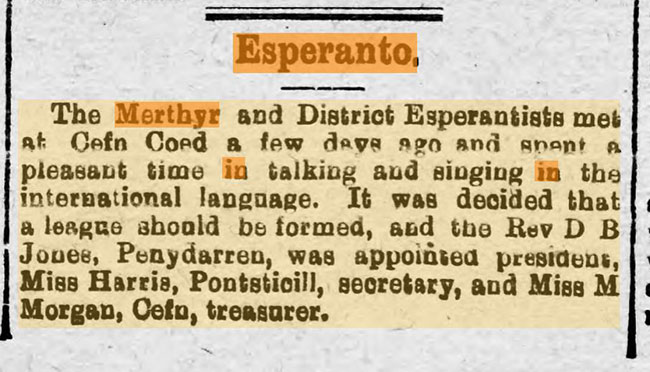 At the age of 21, Big Daddy married Hannah Richards on the 3rd February, 1896 at the Register Office in Merthyr. The day was a Monday which seems a little unusual as most people would have been working. The reason we see so many people married on Christmas day back then is that it was one of the few days of the year that a couple would have off from work. I notice too, my Grandfather was born on the 9th of May 1896, which was only 3 months away. That means Hannah must have been 6 months pregnant on her wedding day. It must have been difficult for them both in that day and age. Moving on and we can see that Big Daddy gave his address as 19, Lower Colliers Row, Merthyr Tydfil and his occupation as Coal Miner. As we know, the couple went on to have ten children, 5 boys and 5 girls. By the 1911 census, the family are safely settled at 13, Baden Terrace, Penyard, Merthyr Tydfil. Bryn, Doris and Bert are yet to be born.

This would be Big Daddie’s and Granny Annie’s home for the rest of their lives. A small two up two down house, nestled in the middle of a row of terraced houses, similar to mining communities all over the country. No front garden, the door leads onto the pavement and an outside toilet in the back yard. The small kitchen was known as the ‘scullery.’ It’s hard to imagine such a tiny house being a family home to 12 people. There would have been no running hot water and a bath would have been a tin tub affair in front of an open coal fire. Big Daddy was a quiet man who had a strong belief in fairness and particularly opposed the exploitation of people by the Iron and Coal Masters in South Wales and beyond. He was at the forefront of helping set up the local Independent Labour Party and a staunch supporter of its founder, Keir Hardy.

Keir Hardie and the formation of the Independent Labour Party


Ken Jones told me that Big Daddie was known as an ‘Agitator’. The modern definition is “a person who stirs up others in order to upset the status quo and further a political, social, or other cause:” Don’t forget, this was the early part of the twentieth century and the working man had very little if any employment protection. No health and safety and working down the coal mines, in particular, people often lost their lives in accidents or through silicosis caused by coal dust inhalation. There were social issues with Masters paying workers through the old ‘Truck System’ of tokens that could only be spent in shops owned by the Masters. There weren’t any Unions and this was always exploited by the owners of the mines to the complete detriment of the worker. Big Daddy stood up for fairness, for his co-worker, for the well being of others and eventually it cost him his employment.

..the floorboards had worn to the shape of a horseshoe..

The General Strike of 1926 resulted in the miners eventually going back to work after months of protest. Many lost their jobs including Big Daddy. The Masters felt they had won the strike and took the opportunity to remove anyone deemed an agitator, troublemaker, shirker and anyone they didn’t want working in the mines anymore. Never again would Big Daddy set foot in a coal mine. Being the ever-resourceful man he was, he turned his hand to the family tradition of hairdressing. After all, everyone needs a haircut sooner or later and Big Daddy was prepared and ready to provide the local male population with the latest cut and shave. Mostyn Burns said Big Daddy installed a barbers chair in the front room of 13, Baden Terrace and opened it up as a barbers shop complete with a red and white pole outside. After 20 years or more, the floorboards had worn to the shape of a horseshoe where Big Daddy had paced around while cutting the hair of many a local head.

Big Daddy was also an avid lover of the radio at that time, better known as a wireless. This was when radios had huge batteries which were called accumulators. Heavy things that were filled with sulphuric acid yet had to be taken to the local garage, hardware or cycle shop to be charged. You usually handed one in and were given a replacement one to use. When the replacement one had run out of power, you would take it back in exchange for your fully replenished battery you had taken in a few days earlier. They were needed to power the huge valves in the back of the wireless. My Father told me that Big Daddy made a lot of these radio’s/wirelesses himself and there would be a thing called a cat’s whisker to tune it. Because the batteries were filled with acid and Merthyr was a hilly place, quite often you would find holes in your trousers and socks where the acid had spilt while struggling home from the shop.

Big Daddy and Ann were married until her passing in April 1951. He remained in Baden Terrace until his passing in 1958 and are both buried together in Cefn Coed Cemetery, Merthyr Tydfil. It’s ironic that the nearest he came to being involved in sport was as treasurer for the local Plymouth football team, yet he had five sons that went on to play professional football at all levels. A remarkable man and I am fortunate to be able to say he was my Great Grandfather.