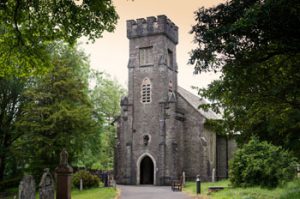 Eglwys Newydd is a daughter chapel of the Parish Church of Llanfihangel y Creuddyn in the county of Cardiganshire, South Wales. Situated about 6 or 7 miles east of Aberystwyth in a place called Cwmystwyth. It was originally built in the 17th century by the Herberts who lived in Hafod House, the grounds where the church stands.
In the late 18th century, Hafod House was acquired by Mr Thomas Johnnes who set about redesigning not only his house but also the whole area known as Hafod which included the rebuilding of a new church. Although nowadays there is very little to see of the house, the grounds are still a place of beauty with many of the 2,000,000 trees he had planted. The church and churchyard remain intact, nestling in a little valley at the head of the road to Cwmystwyth.
From the parish records of the church, it has been possible to find the Baptisms of our 3xGGrandfather Daniel and his twin brother Lewis Jones on February 16th 1802. The record states, “Baptism: February 16th 1802, Daniel and Lewis Jones, twin sons of Morgan and Mary Jones of Rhydmorwynion.
After spending many an hour pouring over different records at the National Library of Wales in Aberystwyth, it has not been possible so far to ascertain where and what exactly Rhydmorwynion was. With the help of professional researchers at the NLW, we have still not been able to verify what/where the property was. A couple of ideas have been put forward, 1) it was a lead miners cottage, 2) that the real name of the abode was Rhydperenion of which there are many records regarding a Jones family. However, we have still to find any concrete evidence that they are the same family as our own.

A short video about Hafod

Cwmystwyth lies between Devils Bridge and travelling east, the border of Radnor. Today it is a place of peace and beauty, a far cry from the days when Daniel Jones was born in 1802. This was at the heart of lead mining. If I can quote from an excellent book of the area “Peacocks in Paradise” by Elizabeth Inglis-Jones:

‘The reputation of all that part was so bad in the old days that it was regarded with fear as a savage land inhabited by a savage race. Travellers, when circumstances compelled them to pass that way, did so with great uneasiness of spirit and their lives in their hands. I was putte in great feare how I should passe the Vpper parte of Cardigansheir, for it was towlde me that I must pass a place called Coomystwyth, where many Theeves that lived as outlawes, and some not outlawed indeed, made their abode, and they lived by open Robbyinge; but God be thanked I escaped their handes, and they said that place and thereabouts is never ffree from such persons.’

Driving through the area nowadays there is very little sign of any inhabitants. On the hillsides can be seen the remains of some of the old lead mine workings. To the left of the main road travelling from Radnor runs the River Ystwyth. The name Cwmystwyth means Cwm=Valley and Ystwyth, the valley of the River Ystwyth.
It would appear from the NLW that 90% of the inhabitants of Cmwystwyth in the early 19th century were lead miners or were involved in the industry in some capacity. The other 10% would have been employed in the grounds of nearby Hafod House. Until we can find some more concrete evidence to link with our Jones ancestors we cannot assume anything.
The next piece of documented evidence that we have takes us about four miles west to Llanbadarn Fawr.

Llanbadarn Fawr Church is situated on the outskirts of Aberystwyth. It was here on January 20th 1830 that Daniel Jones married Anne Griffiths. Daniel would have been approaching his 28th birthday and Anne would have been 26. The parish church records states that both Daniel and Anne were living in the parish at the time of their marriage. These early dates of pre 1841 (this was the date of the first census records) means that checking details like addresses are so much more difficult. However, from future census records such as the 1851/61 we were able to ascertain that Daniel was born in the parish of Llanfihangel y Creuddyn and Anne was born in Llanbadarn Fawr. Their eldest child John was born in 1832 also in Llanbadarn Fawr and it was from here that we could trace back to find the marriage.
When exactly Daniel moved from Cwmystwyth to Llanbadarn Fawr we do not yet know, or indeed the reason why. Another interesting item regarding Daniel is that he was a twin. Each generation that followed him also bore twins, down to my Grandfathers generation at which point it seems to stop.
What occupation Daniel was employed in during this period of his life has still not been verified. It is well known that by the time he and his family had arrived in Merthyr Tydfil he was a barber. Perhaps he picked up this skill in Llanbadarn or nearby Aberystwyth to escape the lead mining industry in Cwmystwyth? Again, we cannot assume until we find the neccessary evidence.